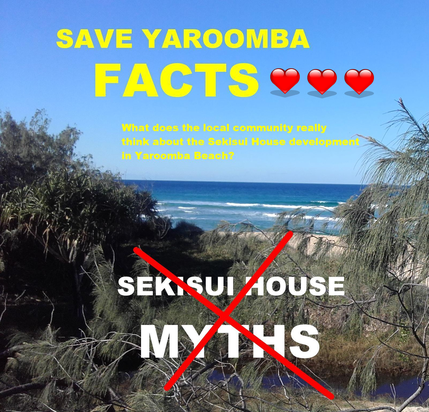 One would have to be on the generous side of gullible to swallow or believe Sekisui's claim of local support for their high-rise Yaroomba development. In their alternative reality world, befor etheir formal Development Application (DA) was submitted to the Sunshine Coast Council in May 2017, apparently 66% of people simply couldn't wait for the heavy trucks to start lumbering loudly down the David Low Way.

Well, let’s apply the blowtorch to their assertions. Right at the end of this article we are simply going to blow their claim apart.

Late in 2016... 2,297 people visited their website, 418 people visited their listening post at Mt. Coolum Shopping Centre, and 641 people sent Sekisui feedback submissions.
But enough of the well deserved fun and mayhem at Sekisui’s expense. It is time to demolish their community consultation (pre the DA) and ongoing support claim in a small number of words...  There is was and still is very strong opposition to this development by the residents of Yaroomba/Coolum. Two local community groups have their own community consultation and support figures. And please note – these figures come from just two local organisations. Groups such as SCEC, OSCAR, Coolum Ratepayers Association etc are also out there.
During the Public Notification period of the DA process (from November 2017 to January 2018), 11,692 properly made submissions were received by Sunshine Coast Council relating to the content of the DA.
Case closed. The Sekisui myth regarding their community consultation efforts and level of community support received is well and truly busted!