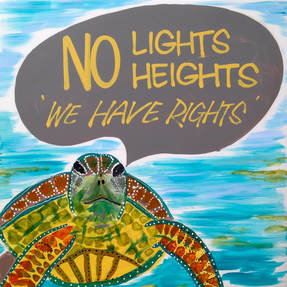 The endangered Loggerhead Turtle nests on Yaroomba Beach. It is our contention that a light-emitting high-rise resort, proposed by Sekisui House for Yaroomba, will negatively impact on the survival chances of this species.

It is very easy to approach this subject matter from only an emotional point of view, however, in order to counter Sekisui's questionable turtle survivability claims we are not relying on emotion, we are putting forward solid facts based on scientific evidence. Everything written here is referenced and sourced.

Even though current Conditions of approval of the DA suggest that a Turtle Expert must be employed to make sure all works and development protect the Turtles, it is difficult to see how this is possible with the scale of building on the site.

When hatchlings are attracted to light inland they may be exposed to increased mortality from avian and terrestrial predators, trapped in vegetation or killed on roads. If hatchlings do reach the ocean they may have used valuable energy reserves required to reach pelagic feeding areas. Lighting of jetties, vessels or platforms can create pools of light that attract swimming hatchlings and increase their risk of predation (Thums et al. 2016).

Artificial light can therefore cause a gradual decline in the reproductive output of a nesting area, with changes not evident for decades because of the long life cycles involved.

Marine turtles nesting on beaches in Western Australia and south-east Queensland have been identified as being at highest risk from the effects of light pollution from urban and industrial development (Kamrowski et al. 2016).

Light pollution is managed at the local council level, except in instances where state/territory or Commonwealth environmental approvals require the management of light by a proponent. There are a range of guidelines available to provide advice to proponents, consultants or the general public, but as a general rule turtles require naturally illuminated beaches for successful nesting and sea finding behaviour (Limpus et al. 2015, Robertson et al. 2015).

When hatchling sea-finding behaviour is disrupted, the prospect for hatchling survival significantly diminishes (Witherington and Martin 2003).

The principle cue used is visual, based on the direction of the light is coming from and elevation of the beach relative to the horizon (Limpus and Kamrowski 2013). Hatchlings orientate away from dark, high silhouettes and move toward the light horizon line at the lowest angle of elevation (Lohmann and Lohmann 1996; Limpus and Kamrowski 2013)
Night time artificial illumination pollutes nesting beaches and degrades the environmental visual cues commonly used by hatchlings to assist in the navigation from their nest to the sea (Salmon 2003; Tuxbury and Salmon 2005).

Artificial lights have the potential to overwhelm natural light and shape and cues, which results in hatchling disorientation or misorientation (Salmon et al. 1995; Salmon and Witherington 1995). Hatchlings that are disorientated will crawl in no set direction and can circle aimlessly for hours, using up vital energy reserves necessary for a successful off-shore swim (Salmon and Witherington 1995; Pilcher and Enderby 2001; Hamann et al. 2007; Rich and Longcore 2013).

Misoreintated hatchlings will crawl in a set direction, but away from the appropriate direction, typically crawling towards an inland artificial light source (Salmon and Witherington 1995). Both misorientated and disorientated hatchlings can become physiologically stressed by dehydration, and are frequently preyed on by terrestrial predators or killed after sunrise because of exposure to high temperatures (Bustard 1972; Witherington and Bjorndal 1991; Rich and Longcore 2013).

Although wave orientation and the earth’s magnetic field are the principle cues used to orientate the off-shore swim, artificial light can also affect this process, by attracting hatchlings towards the light source, even after the hatchlings have left the shore (Thums et al. 2016). It is estimated that during the 2014-15 nesting season on Heron Island, between 765 and 1752 green turtle hatchlings were likely to have perished because of being misorientated by shore-based light pollution after they had entered the water and commenced their off-shore swim (Truscott, Booth and Limpus 2017).

Disruption to sea-finding behaviour can occur up to 500m away from the light-pollution source (Salmon 2003; Tuxbury and Salmon 2005).

It is well documented that night-time artificial illumination present on nesting beaches distracts hatchlings emerging from their nests and discourages nesting females from coming ashore (Witherington 1992; Salmon et al. 1995; Berry et al. 2013 Limpus and Kamrowski 2013). Hatchlings that have entered the sea and begun their off-shore swim can be attracted back to shore by land-based artificial lights (Truscott, Booth and Limpus 2017). 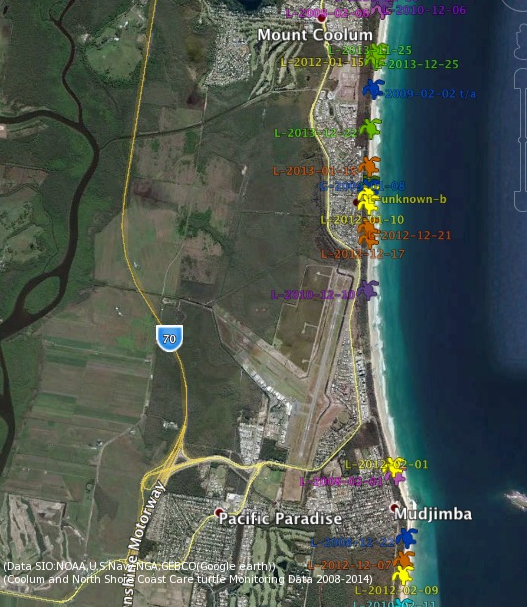 Limpus CJ and Kamrowski RL (2013) Ocean-finding in marine turtles: The importance of low horizon elevation as an orientation cue. Behaviour 150: 863-893.

Lorne, J. K., and Salmon, M. (2007). Effects of exposure to artificial lighting on orientation of hatchling sea turtles on the beach and in the ocean. Endangered Species Research 3, 23-30.